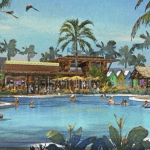 Changes perception I should think….

DAYTONA BEACH, FLA. – You can’t get any more laid back than retirement. So perhaps it’s fitting that the king of laid-back music, Jimmy Buffett, is lending his vibe to a retirement community.

Margaritaville Holdings and Minto Communities announced the partnership last month. Minto said the community’s focus will be on music and will include a band shell for live entertainment.

Construction has begun, and the village is slated to open this fall.